Time to make the doughnuts... 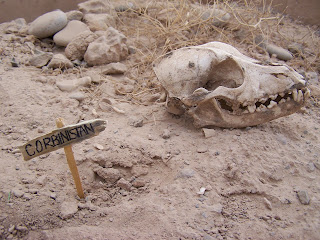 It was just before 0100 and we were changing shifts at the Supply Support Activity; me, Specialist Andropopulus, Sergeant Domino and Sergeant Ack were relieving the other team and beginning our 12-hour shift.

We had just settled-in and begun the computer back-up process when we heard a loud, deep and resounding “BOOM”.

It had been some time since there had been any kind of attack, and never this close to our area of operations, so we all looked at each other with wide-eyes for just a moment before reacting.

“That was fricking close!” Andropopulus cried out.

“Shut up and get your gear on,” SGT Ack yelled back as he joined me and SGT Domino at the rifle rack where we were already locking and loading.

The thudding booms were getting closer and we could feel the earth trembling from each impact – dust was drifting down from the creases of the tent’s ceiling and the lights began to flicker.

As SGT Domino was strapping on his helmet, he looked at me and said, “Man, I am too close to getting out for this, yo?”

I just shook my head and finished gearing-up; he might talk junk, but I knew we could count on SGT Domino when it mattered.

“Oh man, it is right out there,” Andro moaned, white knuckles gripped around his M4.

SGT Ack flicked his fire selector to “Semi” as he calmly said, “Andro, you and SGT Domino head to the left, me and SGT Corbin will take right. We will keep it pinned down with suppressive fire until we get air support – they should be here any minute. Everybody got it?”

Andro gave an audible gulp, but nodded his head. SGT Domino quickly crossed himself and replied, “Hooah.” I looked at SGT Ack with a resigned grin and said, “Guess it’s time to earn our combat pay.”

We burst out of the tent with Andro and SGT Domino cutting left and me leading SGT Ack to the right. I almost stumbled when I saw it – the biggest tyrannosaurus rex ever. It had to be at least 20 feet tall, its teeth were as long as broom handles, and it was heading straight toward Andro and SGT Domino with its stubby arms thrust out, its long tail swinging countermeasure to its thundering footsteps with its head cocked like a giant robin about to peck at a worm.

Geeze, I thought, it is going to get them. I began firing at the dino’s head, trying to hit the eyes – the one weak spot not covered in thick, Kevlar-like scaly hide.

SGT Domino was focused on getting to a shipping container for cover and didn’t even see it coming; the t-rex bent down and snatched him up between his jaws and with a bite and two gulps, SGT Domino was gone.

Part of me recognized the sound of the Apache helicopter coming in, but I knew it was still too far to do anything and I looked for SGT Ack who had some how disappeared. I didn’t have time to wonder where he was since the t-rex was now stomping towards Andro, bellowing in rage and hunger.

“Run Andro, run!”, I yelled as I went full auto, trying to get the t-rex to turn away.

The t-rex got to him in three steps and bit Andro in half – his legs fell to the ground twitching.

The whump-whump-whump of the Apache was getting real loud and just as I turned around to look for it, the pilot launched a Hellfire missile, but it missed and only blew a HUMV-sized hole in the ground next to the t-rex, which only seemed to make it madder.

I was out of ammo and was grabbing in my cargo pocket for my extra clip when SGT Ack came blasting out of the storage yard on the 10-ton forklift.

“YEAHHHH! Take that, take that!”, SGT Ack screamed as he rammed the forks under the t-rex and began lifting.

The dino was roaring loudly in frustration as it’s back legs were quickly lifted off the ground and only its thick tail was keeping it from falling over when the Apache fired another Hellfire that, this time, was right on target.

The t-rex’s head evaporated in a mist of red and green gibbets. Its tail went into death-mode spasms and knocked the 10K, with SGT Ack, over like a Tonka truck, but it was not a hard hit and I was pretty sure SGT Ack was okay; not like poor SGT Domino and Andro.

The Apache was hovering directly overhead like it was going to land on top of me and all I could hear was it getting louder and louder: WHUMP-WHUMP-WHUMP!!!

I jerked awake and sat-up in my sleeping bag. I stumbled out of my bed and went to answer my door.

Staff Sergeant Hatch was standing there, “Hey, Corbin, bout time you got up. Are you going to work or did you decide you were going to take the day off?”

Time to make the doughnuts...

The above was just a dream of mine and fiction. Names, character, places and incidents either are products of my imagination or a used fictitiously. Any resemblance to actual events, locales or persons, living or dead, is entirely coincidental; although still pretty funny, to me.

We have not received mail for several weeks now, but a big shipment came in today so tomorrow when I go on shift I should receive anything sent from the beginning of the month - I will shout out thanks next post.