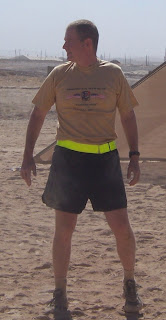 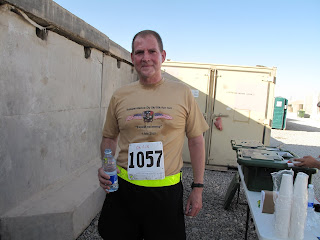 Since, as far as I know, the only country that celebrates Thanksgiving is the United States, I have always considered it to be the truly unique American holiday. But, for sheer exuberance, I don’t think anyone will argue that the Fourth of July, our Independence Day, is the epitome of American celebration.

Here at TK, we had our 4OJ celebration this year on Saturday, the 3rd of July. I am not sure why it was a day early, but if I were to speculate, it could have been there might have been concerns about the bad guys doing something – since they seem to have calendars as well, or it might have been to avoid a conflict with Sunday worship and the 4OJ celebration activities.

In any case, the activities began at 0500 on Saturday with a 5K (about three miles) and 10K (about 6 miles) Fun Run/Walk. Since I usually run the 5K route a couple times a week for PT, I wanted a challenge and signed up for the 10K run.

For the first 160-odd people who signed up, or was a volunteer/”encourager”, there were free t-shirts commemorating the event. One of the reasons I signed up for the event, even though I had full 12-hour duty shift ahead of me after the run, was so I could get a t-shirt as a remembrance.

The shirts were handed out the morning of the run/walk during registration. After registration and a safety brief, it was ready-set-go at 0600.

I thought I would be the oldest guy running, but I found out there was one other person a year older than me so we ran together and kept a pretty steady pace of around 8-minute miles with a total time of just over 49 minutes – not too shabby for a couple of guys in their mid-forties at 4,300 feet altitude.

The longitude/end of the 10K route had us go past, by a couple of clicks (kilometers), the point where my (mostly) daily 5K run route ends, so my mind/body was ready to call it quits at its normal ending point; this made me grateful to have someone running with me to keep me honest and on pace to the end (thanks again, Sir.)

At the end, there were prizes for the female and male (not by age categories or I would have certainly have won a prize even if I probably would have had to “accidentally” trip my running partner) who came in first place for the run and walk in both distances.

One Soldier was so quick he got to the turn-around point before the race officials were there to show him the way. He got a special prize for going 5.5 clicks, and to the laughter of the crowd, was ordered by the Command Sergeant Major to report to him later for failure to follow directions.

After the race everyone went in different directions; some to breakfast and most to showers.

I cleaned-up and headed to work. Although I was able to leave shortly thereafter to participate in the next activity: volley ball competition.

The natural TK environment, where gravel/rocks have not been place, consists of “moon dust”, which is perfect for volleyball, although it is so fine (talcum powder consistency) it makes its way through almost any shoe fiber to turn socks and toes ochre brown.

My black PT shorts got a bit of a dusting when I dove for one ball (that made it over the net, but not in bounds – doggone it!) so the picture above is me just as the first game began. (I crop out other Soldiers as I do not think it appropriate to post their pics without specific approval).

My team won the first game, but lost the next match so we came in second to bring our Company 15-points to be tallied together with the points from the events of the day such as horseshoes, basketball, and the ever popular 4OJ activity, litter-carry – where a Soldier lays down on a canvas medical litter and is carried by four other soldiers over a set distance.

My Company went the whole distance and was announced as the overall winner during the outdoor dinner meal of grilled steak, hamburgers, mongo-hotdogs, and chicken served with potato salad and baked beans.

The ice cream and cake was served at the mess hall (pardon me, dining facility) so the only thing really missing was fireworks, but considering our location, that is something for which we probably all should be giving Thanks.