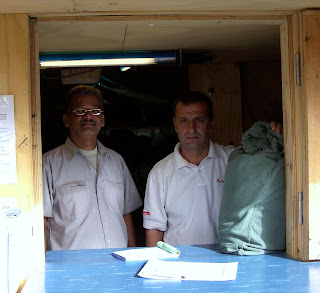 The day after the Berlin Wall came down in mid-November of 1989, I was on a plane traveling from San Francisco to Korea for a one-year tour. I ended up stationed in Seoul and got the opportunity to explore that city as well as major cities like Osan and Pusan, and a few smaller villages when traveling.
It was my first time in Asia and I had the chance to see a completely different culture up front and personal. I think any Soldier who spends a tour in Korea leaves with some strong feelings and unforgettable experiences, both good and bad.
For me, one of the good ones was having “in-house” boot-polishing and laundry services in the barracks. Twenty-bucks got you a month’s worth of clothes/uniforms washed – with everything from BDUs to blue jeans to boxers being ironed – and your black leather boots being highly-shined – not quite a spit-shine, but a very nice high glow.
In the morning you left your laundry bag with your boots by your door and when you returned in the evening, the boots where shining and the clothes were hanging on the door knob – with socks, tshirts and the like, neatly folded and stacked on the squared laundry bag.
The services were provided by an older Korean couple (I almost said elderly, but they were not that much older than I am now – to a 23 year-old, they seemed elderly). Odeeshi (Uncle, but used as Mister) and Oshima (Mrs) arrived at the barracks around 0800 and spent the whole day in the 1st floor laundry room; Odeeshi polishing the boots and Oshima doing the laundry.
I despise doing laundry. I think it was a John Hughes film in the ‘80s where one of the angst-filled teenagers (one of the Brat pack, I am sure) leaves a classroom dragging her fingernails across the chalkboard in a dentist-drill, ear-piercing shriek. That sound is what I hear in my brain when I think about having to do laundry.
But here in TK, we do not have to do laundry - instead of Odeeshi and Oshima, we have Mr. Guntka (on the left), Mr. Hismani (on the right), and their co-workers who provide next-day washing services. Although you have to actually walk to their shop to drop-off and pick-up the laundry instead of door-side delivery, they fold the clothes nicely, put them in a plastic bag (that serves very nicely as a trash bag for your room) and then put it in your laundry bag for a very convenient package and great service.
It makes sound logistical sense to centralize the laundry services with all the machines and corresponding electrical/water/drainage located in one spot instead of having separate facilities in each block of the RLBs.
No need for Soldiers to stock laundry sundries such as soap, bleach, etc.
Soldiers are freed from spending precious personal time on doing laundry - which might otherwise get delayed until every sock and pair of boxers had been worn and there was only one t-shirt left.
I know for myself, as someone who is completely clothing-ablutophobic, I really appreciate how it is set-up so any day can easily be laundry day.
SHOUT OUTS!
Thank you to SGT Mack for letting me (constantly) use his camera.
Adrie Kovic rocks for spreading the word about Corbinistan; she blogs as well and agrees we must be complete egomaniacs.
Posted by Sgt Corbin at 7/26/2010 07:30:00 AM