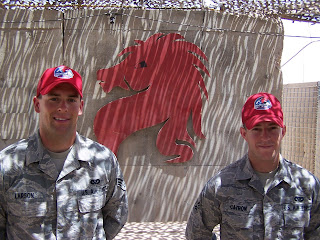 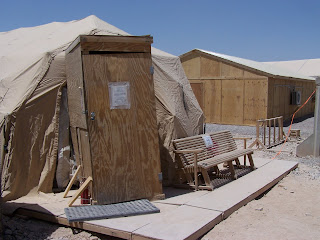 After about four months in TK, when I stand on the balcony/cat walk outside my second-level unit to watch the distant sun settle behind the western horizon's mountain fringe, in front of me the potpourri of wooden shacks, tents of various shapes and sizes, and concrete barriers fits easily in my mind's eye with each structure’s place and purpose now well known to me.

But in my first days and weeks here, the jumbled landscape of various buildings and tents took some time to get to know and assimilate into my consciousness as home and the neighborhood.

During the early evening of one our first weekends here, after the sun had set – which means a certain darkness had fallen as there are not many outdoor lights, I noticed an open area under some tent canopies where it seemed a group of guys were meeting for what looked suspiciously to me like a nice sized poker game.

I was instantly interested and thought about strolling over to see about getting into the game, but after a moment or two of observation and reflection – I thought it might be better to check it out later as it looked like they had too many people already and, it could have been just a one-time event as some kind of farewell party since, as we were arriving, those we were relieving were leaving.

The next day, my neighbor, who was leaving, told me that group was a bunch of Air Force guys who got together to play poker with the Australians from Kamp Holland.

I thought to myself, "Self, what the heck are Air Force guys doing here?"

After joining the Club for Propogation of International Cultural Exchange, I found out through conversations over Hold'm Poker the Air Force guys are doing quite a bit here; almost without exception, all the plywood constructed buildings have been built by them as well as a lot of work on roads and construction in general.

In general, basically a squadron of Bob the Builders.

And building is what they are good at. During my first few weeks here a brand new chapel was completed by RED HORSE so services could be held in air conditioned comfort versus a dark and hot tent.

At this moment, members of the RED HORSE team are putting the finishing touches on a new Medical Clinic building to replace another hot tent.

The picture above shows the current Medical tent on the left – the wooden door/frame is so the medical supplies may be secured – with the new building on the right – note the mounted A/C units for chilling medics and patients; a vast difference in comfort and utility.

The utilities, insulation and just about everything else relating to constructing the building was done almost completely by two of my poker buddies, Senior Airmen Brad Catron and Kenny Larson.

SRA Larson is on the left and SRA Catron is on the right with the RED HORSE logo between the two of them.

Larson is from my home State of Utah and his family lives just a few miles from my parents.

Catron has been here for nearly a year and will soon be returning home to Wyoming.

The two of them are Reservists/Air Guard and will go back to civilian life (they are both in college) once their respective deployment tour is completed.

One of the Task Force No Mercy Army Officers made a comment to me the other day about how whenever he sees members of the RED HORSE team working, how they seem to him to be so happy and satisfied in doing their jobs.

I never asked my buddies if they were happy, but I do think they should be proud of their accomplishments and hard efforts in supporting the mission and the people who work, worship and tend wounded in buildings built by RED HORSE.

Thank you to Donna D. from Milton for the wonderful Care Packages; they were of such a great variety of munchables, which were partially inhaled by the guys on my shift.

Thank you to the Red, White & Bike group at St. Agatha Academy in Winchester; please tell the kids I really liked their letters and may I please post the drawing of the “Smiling Soldier” Lauren sent?

And, thanks to my Mom for a nice Care Package of toiletries and hygenics; the best part was the MET-RX Colossal bars!