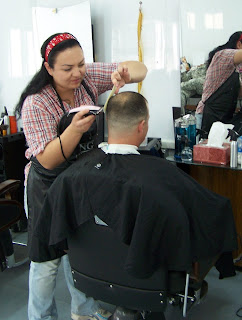 One of the oldest medical practices, used since the time of the Mesopotamians up to the late 19th century, was bloodletting. It was thought many diseases were caused by an overabundance of bad humors in the blood and letting the blood out would bring cure if not relief.
In medieval, and other times when the vast majority of people were illiterate, signs used to advertise services had to be self-evident and typically entailed objectification of the tools of the respective trade. A wooden shoe announced a cobbler while an iron one a black smith.
For the person who would perform surgeries and bleed you, one would see a stout stick (tightly grasped by the patient to cause the veins to bulge) wrapped loosely with bloodied white(ish) bandages. On top of the stick, one would also often see a round ball representing the basin in which leeches were kept.
Services also offered by these surgeons included pulling teeth and cutting hair. Today, only hair, not veins, are cut by the professionals advertising with a red and white pole (it is thought by many the addition of the blue stripes in American versions of the standard is a tribute to our flag, as well as the color of arterial blood).
When we first arrived at TK, there was only one barber located on the Dutch Kamp Holland and through his monopoly of service, had strange hours of business where at only certain times of certain days would he even cut the hair of American Soldiers.
One of the Soldiers in my platoon made the trip and came back unshorn as he was upset at the perceived lack of hygiene ("He didn't even wash the clippers between cuts!")
So for the first few months we made do with amateur efforts of the one or two Soldiers who brought clippers. A trim to military standards really is not all that difficult if you trim everything to the skin with the top a slightly more coarse stubble.
My stubble was getting longer as I decided to let the Kojak-look go in deference to the sun - even the 45-odd minutes a day I was getting during PT was crisping my shiny skull. The hair down my neck was getting a bit long and generally Neanderthalish in appearance.
When, thank goodness, Ms. Alia Borombaeva, pictured above, along with one or two of her colleagues, made an appearance and set-up shop in our Camp. Now, like CPT Gregory Hayes (seen above), Soldiers in our camp can get our haircut by someone who makes up for the lack of a firm grasp of spoken English, with a keen grasp of scissors and clippers.
Ms. Borombaeva and her co-workers are available from 0700 to 1900 every day and almost always have at least one happy customer getting their hair cut under the barber pole.
S H O U T O U T S
Thank you Kandice Eason of Newman, GA for the letters and great Care Packages; the whole platoon enjoys the items you send and appreciate your warm letters.
Oregon Coast Avid Stampers has provided some awesome home made greeting cards Soldiers can send to loved ones - we do not have access to any cards or stationary, so ORCAS gifts are going straight to use.
Thanks to the organizers and volunteers at Operation Care Package for the mail with Swedish Fish (yum!) and other goodies.
The Shannon Family of Saratoga Springs, NY sent one of the best Care Packages ever! Jerky, biscuits, dried fruits and other healthy snacks - thank you!
Si Tenenberg is a former Marine and a current supporter of troops; Si knows what will bring smiles to those far from home and he along with volunteers from First Baptist Church of San Luis Obispo brought cheer to my platoon with a package of jerky, trail mix and other nice snacks.
Lucile is a 74 year-old Korean War veteran from Haure de Grace, MD who sent me a box full of Lee Child's "Jack Reacher" novels I am greatly enjoying and passing on, one by one, to other Soldiers.
Georgette Johnson has been supporting Corbinistan for some time and her cards, letters and packages are very much appreciated by many Soldiers.
Lastly, to my family, particularly my Mom and sister-in-law Beth, who both send packages on a regular basis - thank you.
Posted by Sgt Corbin at 8/10/2010 04:00:00 PM