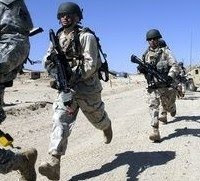 When I went to Basic Training in 1983, during the summer vacation between my junior and senior year of high school, running for exercise was not nearly as common as today and if you did run, you were not a runner, you were a jogger – or a health nut.
Turns out I was a nut. Over the miles we covered each morning for physical training, I discovered a natural affinity for running. I enjoyed the muscle burn, the feeling of fitness, and the sense of accomplishment after completing a run.
We typically ran every day with a long run (six to eight miles) once or twice a week. We quickly learned the designated run routes and knew by certain land marks how far we had come and how far we had to go. If we took a left at a certain intersection instead of a right, we knew if it was going to be a short run or a long run.
Whether it was a short run or a long run, for me, the magical point was when we got half-way. As long as I could make it half-way, I knew I could finish the run.
Since then, in various aspects of my life, the half-way point of an endeavor has been the goal at the beginning and once reached, a motivating accomplishment to carry me through to the finish.
We have now passed the half-way point of our one-year deployment and this accomplishment – having fewer days left than the number of days we have been here with the end in sight – is very motivating.
When I ran the Marine Corp Marathon in 1992, one of the motivating factors was the people all along the race course who, as I ran by, cheered and waved signs or offered water. I did not know a single one of those people nor did any of them know me, but there were times during the run when their support made all the difference in my completing the race.
Just as the support of the emails, letters and care packages I have received from the many people who I do not know personally has made and makes all the difference in my completing this deployment. (People I do know, such as my family, have also been very supportive.)
I try to send thank-you letters and, when I know they do not mind, recognize them in the “Shout Out” of this blog, but with 12-hour duty shifts and other responsibilities it can sometimes be very challenging to do anything other than shower, eat and sleep.
During the second-half of this deployment, I will strive to ensure my appreciation, and that of my fellow soldiers with whom I share the care packages, is more strongly and individually expressed.
In the interim, I would like to express my sincere gratitude to all those who have helped me make it half-way home.
Posted by Sgt Corbin at 10/08/2010 07:23:00 PM