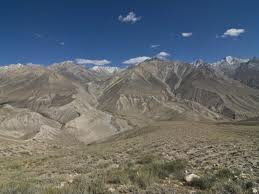 In case you didn't immediately check out the geostats of Bagram via the link I provided in my last post, the base is located in a valley amongst the Hindu Kush (Hindu Slaughter - more on that some other day) mountain range and has an elevation of approximately 4,895 feet.  To put that in perspective, there are 5,280 feet in a mile.


Fort Campbell is at approximately 544 feet.  Making the difference between Bagram and Fort Campbell about 4,350 feet; or, the approximate elevation of my home town of Salt Lake City, Utah.  Meaning, if you add Salt Lake to Fort Campbell, you get the Bagram elevation - about three hundred feet short of a mile.


As you might imagine, the air is considerably thinner here than what we are used to at Fort Campbell and it takes a bit of time to acclimatize to the change.  I figured a week would be enough time for me to adapt and I decided to go for my first run yesterday.  I knew there was a mile-loop within our area where many Soldiers do their PT, but I wanted something a bit longer without making multiple laps and figured I would try out the four-mile loop one of the soon-to-be-departing 82nd Airborne Soldiers told me about.


Around 0530 I oriented myself on the sun to make sure I was tracking the compass points in relation to our living quarters and began my run.  I took the first left-turn, as I thought the 82nd Soldier indicated, and hit a nice long stretch around a mile long.  After about two-miles I knew I had gone well past our area but figured I would eventually come to the left turn that would loop me back so I kept on going - there were vehicles and other Soldiers on the road so I was not too concerned.


After about three miles I was beginning to get a bit concerned since I seemed to be heading further east - the opposite direction of where I wanted to return.  I was still passing Soldiers and vehicles but there didn't seem to be any roads heading back to where I wanted to go; "Good grief", I was thinking to myself, "this is going to turn into an eight-miler."


The topography of the area is a bit like a very rumpled bed with rolling hills and dips so I couldn't depend on line-of-sight for orientation - I was basically tracking the sun and the departing/arriving aircraft from the airstrip to keep myself from going too far off the reservation.


I was feeling the burn but finally came to T-intersection in the road where a left-turn looked like it would take me back.  So I took the left and began heading down the straight road - that appeared to bend to the left about two-miles down.


At this point, I had been running for about 50-minutes, had already gone at least five miles and was thinking I should only have to go a few more to get back; I was feeling the classic symptoms of altitude sickness such as fatigue/weakness, shortness of breath and I was a bit dizzy and light-headed, but, hey, that's how an old guy like me feels after running five miles.


About 500 meters, or about a third of the way, down the straight-away, I realized there weren't so many vehicles passing me any longer and I hadn't seen any Soldiers in a bit either.  I wasn't really concerned; more mad at myself for obviously missing a turn somewhere and figuring this long run was what I deserved for not paying attention.


Then a white vehicle approached me, slowed down, and stopped.  It was the Military Police.


They rolled down the front passenger window and the driver asked me if I knew this was a "No PT route".


"No," I answered, "I have only been in-country for a week and this is my first time running out here."


She replied, "Well, there is a sign posted saying this road is a non-running route: this is called Sniper Alley."


She told me to get in the vehicle and she would give me a ride back.  I was very grateful as after I had stopped to talk with them, my body flooded with exhaustion and I could barely catch my breath.


Well, it seems a ride back meant just 500-meters back to the T-intersection.  They dumped me out there, and to add insult to injury, proceeded on the way I needed to run to get back.


I really was beat by then and ended up mixing-up a bit of walking with my running but after around two-miles, I found the left-turn (now a right) I had originally missed - it was about at the two-mile mark from where I had first started - and finally ended up on the one-mile loop.


After a little over 80-minutes of running and at least eight miles, I finally straggled back to my living quarters where I drained two bottles of water and collapsed on my bed.


I am Very grateful I learned the name of "Sniper Alley" from the MPs (and the lift, short as it was) instead of personal experience and I am going to be much more careful about my routes, but I am still going to keep running, man.
Posted by Sgt Corbin at 9/04/2012 01:16:00 PM