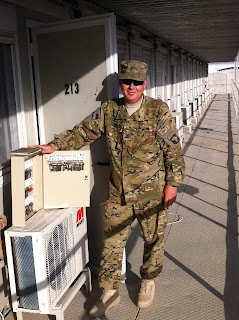 As you might imagine, military units do not deploy all at once, all together.  Like Army Ants, they move in waves with scouts which go forward to clear the way and get things coordinated and arranged like, oh, say, places for the forthcoming Soldiers to sleep.


Typically, there is one person in the advance party who ends up responsible for the living quarters.  This person is the one who keeps track of the empty or soon to be empty rooms and the assigning of rooms/room keys.  That same person is usually the point of contact for maintenance issues - the one you go to when the air conditioner doesn't work (yes, we have A/C) or if the electricity is fritzzy or if there is a leak, etc.


If you were living in someplace like NYC or Boston, they would be called the Super and their full-time job would be taking care of the building and the tenants' needs.  In the Army, that person is usually called the Mayor.


So, when me and about a hundred of my 101st CAB buddies arrived in Bagram a calendar line or two worth of days ago, it was late at night and we were still lagging with time-zone differences - we just wanted to know where we could stow our stuff and hit the rack - preferably in whatever space we were going to be staying in for the duration as we had been in transit for several days and wanted to be able to finally fully unpack and get settled; we were looking for the Mayor.


When we found out Staff Sergeant Swisher, whose real job is the Battalion Safety NCOIC, was the one with room assignments and keys, we swarmed around him like, well, ants - crawling over each other in an effort to get a room and a bed.


It was about 0100 local time (that's one o'clock in the morning to you civilian types) so it was dark out and, in typical Army fashion, a bit of controlled chaos (initially, maybe not so controlled) with Soldiers from various units within the 101st CAB hooking-up with their respective chains of command and trying to sort out where who was going where.


Each Soldier also had at least three large, heavy bags they were trying to keep their eyes on as well so there was an obstacle course of piled duffle bags and ruck sacks.


Oh, did I mention each of the buildings "yards" consist of baby-fist-sized gravel?  The 100+ Soldiers walking around in combat boots on the rough stones added a constant grumbling white noise that sounded like someone crunching Styrofoam in your ear, which contributed to the general confusion by making it difficult to hear what anyone was saying even if they were right next to you.


After a bit more controlling of the chaos by First Sergeants and a lot of work on SSG Swisher's part, almost everyone eventually got a place to sleep for the night - even if it wasn't where they were going to be permanently - just in time for the next wave of Soldiers to arrive, bags in hand, tired and looking for their room and rack so the whole process started once again.


The "next" day (really just later the same day) SSG Swisher went door-by-door giving Soldiers their permanent assigned rooms and keys so they could finally unpack for real.


Over the next few days and up to today, I have seen SSG Swisher almost everywhere: assigning rooms and keys; cleaning out rooms so Soldiers would have a place to stay; meeting with electricians and air conditioner mechanics so Soldiers would have lights and A/C and; in his office doing his "real" job - the Mayor gig is an additional responsibility he has to his normal duties.


One of the things that impressed me that first night and since then, is how SSG Swisher, a 15-year veteran who has been to Iraq nine times (and is married with five kids), maintained a cool demeanor and a constant attitude of service - ensuring all Soldiers were taken care of by going the extra mile and working all and very long hours.