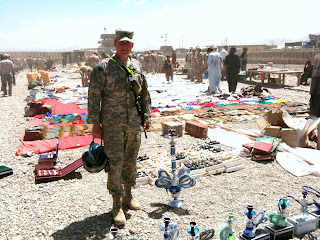 If you Google the word origin of ‘bizarre’, you will find a general consensus of it deriving from the Italian ‘bizzarro’, which meant ‘angry’. Reportedly, it then migrated to Spanish as ‘bizarro’, meaning ‘brave’, and then found its way into French, where its meaning gradually mutated from ‘brave’ to ‘odd’ – and then, as with many other French words, was implemented into English.

I don’t know why, but I always thought the word ‘bizarre’ likely came from Crusaders being exposed to the wide variety of theretofore never seen animals, foods, and goods at Holy Land bazaars. It seems to me a knight converting the noun of 'bazaar' to the adjective 'bizarre' after witnessing such strange oddities would be a much more reasonable genesis than the angry-brave-odd path. But, I am sure there are etymological, historical, and cultural challenges to my hypothesis.

Bazaars are very much a part of the Afghani culture and there is one held here at TK from around 10:00 in the morning until 2ish in the afternoon each Sunday.

Like its American cousin, the flea market, the bazaar has regular vendors who have the same type of goods each week with an established area where they set-up shop by laying out their items on a blanket or rug, and there are vendors who seem to show-up whenever they have acquired enough varied items to display in whatever free space is available.

As you will see from the picture, the available space is full of a variety of items ranging from hookahs, to bootleg DVDs and all sort of random electronics, to rugs (lauded as hand-made), to precious and semi-precious stones.

Lapis lazuli was just another word from my readings of Greek mythologies and the Bible, but here, the speckled semi-precious stone is abundant in both raw and shaped form although the dealers, unlike with other items, are only willing to negotiate to a certain degree.

Haggling seems to be acceptable and somewhat expected (although the dealers are quick to consummate a deal with those who agree to the first asking price) with all sales final and paid in cash – US Dollars being the currency used by all the America, Dutch, Australian, etc. shoppers.

While a very small number of the shoppers are female, all of the vendors are male. Mostly young men in their 20’s with a scattering of boys who look they are around 8 to 10ish and are not shy at all in hawking their goods in a bit of an aggressive manner, but with shining eyes and smiles so it is easy to forgive their forwardness.

No female vendors, nor any vendors at all of food. I have heard the bazaars at other bases have kebab stands, gyro booths, and other edibles, but, for some reason, absent from the TK market.

So, being the curious fellow I am, I began wondering about the market value of, say, a jar of peanut butter. Or, how about a bag of beef jerky? Perhaps a pack or two of Big Red.

Not that I would look to become a vendor or violate any contraband regulations, but I am curious; perhaps there is a bartering and cultural exchange opportunity at the sand flea market.