Patch On My Shoulder 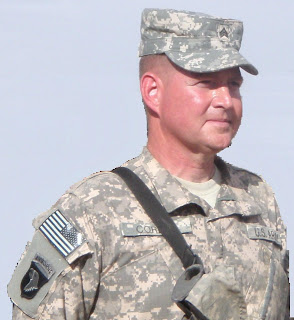 When soldiers join the Army, they are issued (given) Army Combat Uniforms (ACUs) with a US Army tab and another tab with their respective last name, which go above the front pockets of the ACUs. With very few exceptions, every other tab, insignia and patch the solider ever puts on their ACUs are not given, but earned, through honorable service and accomplishments.

The Shoulder Sleeve Insignia Former War-Time Service patch, or "combat patch", is authorized to be worn (on the upper-right sleeve, centered under the American Flag patch) by soldiers who serve for a minimum of 30-days in a recognized combat zone. The combat patch is the unit patch of the unit a soldier is assigned to when deployed to the combat zone.

Since the greater majority of soldiers did not have a combat patch in the early years of the on-going conflict(s), there was no real special fanfare when the patches were earned and they were distributed to soldiers toward the end of the deployment tour. As time progressed, and soldiers were going on their second, third, and even higher number of combat tours, the ratio shifted to a smaller majority of soldiers going on their first deployment and a ceremony to award the combat patch evolved – typically held about 30-days after soldiers have been in theater and the patch has been earned.

There was a palatable sense of muted excitement and anticipation by the soldiers who were about to be patched just as there was an air of bemusement of the soldiers standing to the side in an observation formation who had been there, done that, and got the patch.

The battalion commander gave a, thankfully, brief speech (the ceremony was outdoors in direct searing sunlight and it was very hot) discussing the origins of the 101st and salubriously commenting on the division’s honorable history of service that is being carried on today by the soldiers at Tarin Kowt, Afghanistan.

Although it may look like a smirk in the photo, I was actually trying to hold back the smile of deep satisfaction and pride at being a member of the 101st; and receiving the patch on my shoulder.