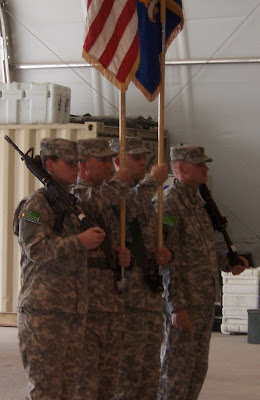 As Mr. Newton observed, for every action, there is an equal reaction. In the case where the action is a group of soldiers deploying to TK for a year, the equal reaction is the group of soldiers who have been at TK for the previous year getting to go home. This official act of one group relieving and assuming command for another group in theater is called “Replacement in Place – Transfer of Authority” (RIP TOA), or TOA (pronounced TOE-ah), for short.

Being the Army, the TOA includes both paperwork and ceremony.

The paperwork is plentiful, but basically consists of the incoming commander signing for responsibility of all equipment and property on the base (belonging to the Army) from the outgoing commander. This entails much work for the soldiers as they must conduct inventories and ensure all equipment and materials correspond with what the paperwork indicates should be present and accounted for.

The ceremony is fairly brief, but very meaningful with the guidon (the respective unit’s flag with streamers representing past campaigns and awards) of the outgoing unit being presented by the guidon bearer, alongside the US Flag with accompanying rifle-bearing guards (collectively, the Color Guard), for encasing by the outgoing unit’s Commander and Sergeant Major – the unit’s senior NCO (SGM).

Once the speeches are complete, the Color Guard retires by leaving the ceremony field to the singing by all present of their respective unit songs and then the Army Song.

Being in the Color Guard is an honor and performing well is vital to the success of the ceremony; carefully choreographed movements must be followed with the soldiers standing statue-like through out the speeches. For anyone who has been in the Army for more than a day, you have likely participated in one or two TOAs or Change of Command ceremonies and know the drill. For anyone who has not had the pleasure; stand-up, with your back straight, chest forward, chin up, and do not move at all for 30 minutes.

How does one get to be chosen for the Color Guard? Well, for me, it was a two-fold qualification process of: one, being a tad over six foot, and two, not being in the room when the selection was being made.

That’s right, look closely at the photos and you will see the soldier carrying the National Colors is yours truly. After several days of practice and the successful completion of today’s ceremony, this is one soldier who is happy that today the TOA is complete.